Some of the most famous kisses football

In the pre-new Classic, with the free online betting To flower of skin, Barcelona woke up with a new graffiti on the streets. It was a kiss between Pique and Ramos painted by TVboy. It was not the first time the famous graffiti artist, Sicilian who lives in Barcelona, Drew fraternal messages when (low) brotherhood between him Real Madrid and Barcelona Football Club had endangered. TVboy and drew Kisses between Mourinho and Guardiola at a time when the contact lip possibly was the most complicated of the universe.

We also left the image of Messi and Cristiano Ronaldo kissing in full battle for the umpteenth Golden Ball. possibly The classic with greater political connotations, Tvboy steepled snouts Pique and Ramos, symbols of Catalonia "especialita" and Spain "Cani". 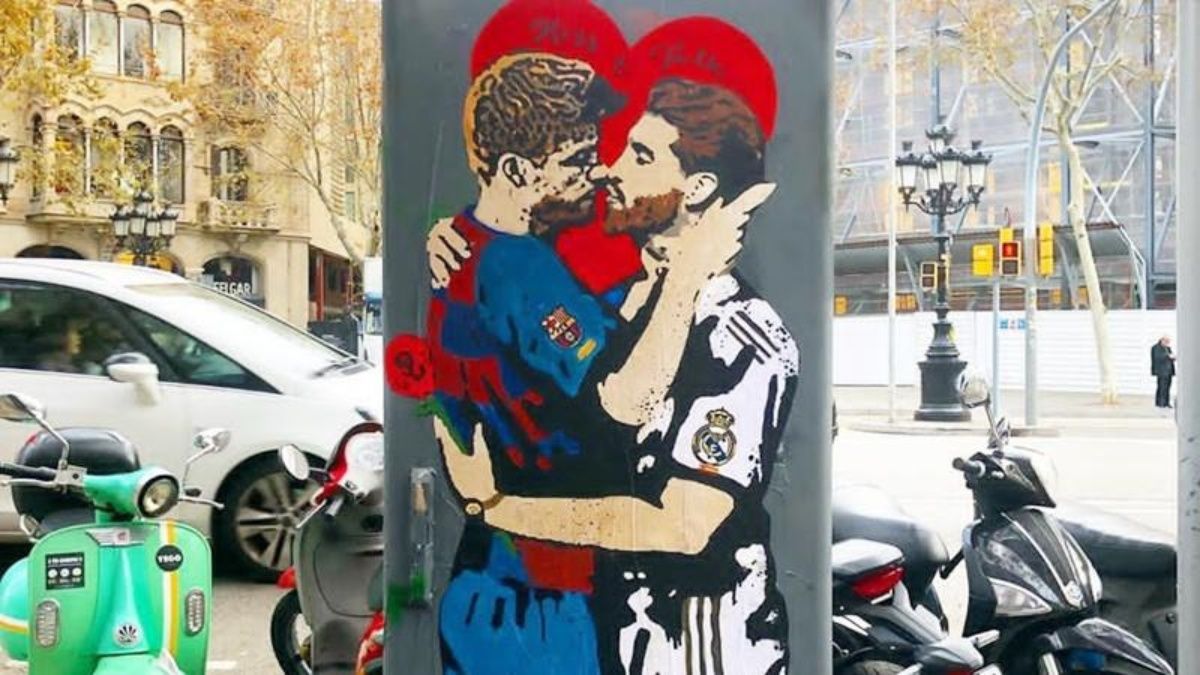 Pulling hemeroteca, we found several Kisses in the ranks of Real Madrid and Barca. Stoichkov He hulled him a kiss on the mouth to Koeman after winning the first desired European Cup. The orejona cup also put to Tiernitos Xabi Alonso already Steven Gerrard. They were acts of temporary insanity at times of extreme happiness. But nevertheless, and any mosquea by reincidente, as in the case of Maradona. The "fluff" kissed Claudio Caniggia in mouth, Boca Juniors say, during a match winning River, but also Carlos "El Apache" Tevez in training, and that already sounds like a vice.

Returning to Kisses of Barca-Real Madrid, missing do, There is no doubt that Sergio Ramos It is the most emblematic player of the set merengue. But nevertheless, on the side the cules doubts could arise. One may think that TVboy I found something Messi short to kiss Ramos, Busquets seems more than piquitos, or that Suarez is more biting.

In any case, should not stop clapping initiatives like this, or those telephone calls between Xavi and Casillas. In fact, They have already emerged voices proposing to further the brilliant artistic idea to merge these two passions, kisses and soccer. Voices calling for TvBoy a fraternal morreo between Shakira and Pilar Rubio. A snog in which it is impossible to choose sides.

Mario Husillos, a hat trick with Real Madrid and one with the club that served him not to sign ...
who was casto? The PES player who became a legend
Soccer players with the most golden boots in history
Guruceta's penalty, the first great refereeing scandal of Spanish football
The 'Cat' Ablanedo, one of the best goalkeepers in the history of Spain
The Asturian derby, one of the most intense of Spanish football
"La Romareda stadium would be closed for at least one year"
The Curse of the selection of Argentina in the Copa America
The official betting house of La Liga: sports
The best forwards center football history
Why Uruguayan footballers are so competitive? Why you wear jersey celest selection ...
Athletic Club-Atletico Madrid, the rivalry between two clubs that began as relatives