Why the amateur football team is called 'fan'?

The football world is full of words and expressions that we inherited and often we do not stop to analyze its origin. We are more than used to refer to fans of a certain team as ‘fans‘ but… Where does this word? What it was the first fan of history?

Recently entered the twentieth century, Prudencio Miguel Reyes Viola assumed tasks in utillero Nacional, one of the historical clubs of Uruguayan football. Reyes functions consisted not only have the polished boots and unpolluted equipaciones properly before every game, but also it took care of the balls - specifically brought from England- they were about, both in training, and the parties that fought in the crowded field National. The latter task ended up being so appreciated by players and coaches, that overlapped their other functions, so that in that country to utilleros they came to call "inflators".

Anyone can imagine that football then was very different from today. Not only for tactical reasons - today would be unimaginable to see a player taking his position in the field statically or pose a gambling scheme in which three defenses have to see against the five forwards – but also differed environment and media coverage. This was reflected on the pitch and in the stands.

The celebration of the goals used to be confined to a brief hug between the players involved in the play in question, diametrically away the passionate outbursts that are offered today, adorned with all sorts of pirouettes and buskers gesticulation. It was also different in the stands, where fans remained indifferent to the vicissitudes of his team, limited to applaud when his people were getting scoring a goal or to censor aloud any arbitration decision. Nothing else.

The first fan of history

But it happened that someone did not fit the canons of the time. The ball, the good Reyes, the "inflator" National, with its portentous vozarrón, He is bawling throughout the game by encouraging his uninterruptedly: "Arriba Nacional", "National Vamos", "National, National, National". To the point spread to much of the crowd who followed, alongs, the cheers that utillero, the "hinchapelotas" club-in the least pejorative sense- improvisaba. 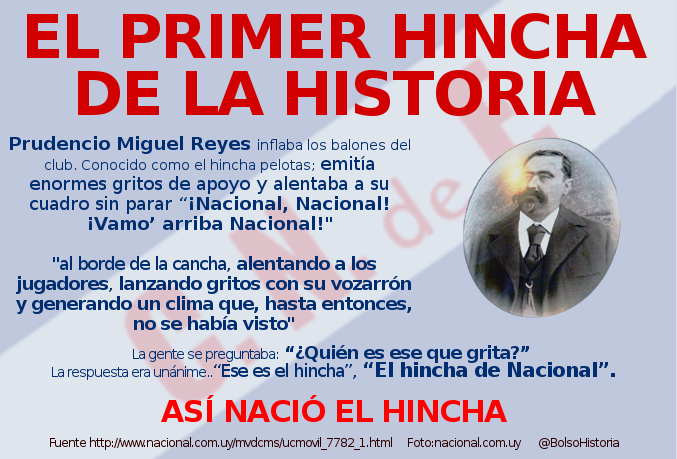 Reyes not only swelled balls, but "swell" to its players, insufflating encouragement at critical moments of each match. For players of the National, the thrust of utillero became a greater need than starching of camisoles. The "inflator", the fan", It was that they could get in every game the best of his game.

His fame ran all over Uruguay, the "fan" of the National, the amateur game, the best utillero, so much so that the doctor and Uruguayan writer Ricardo Forastiero he dedicated one of his poems. He was born the first of the fans, the courageous followers not simply watched the football game, but part of it.

How much did the signings of retro football stars?
Photos from the past that some players would have never done
Racing Club de Madrid, first victim of the football business
The most hated club in world football
What was the first coat of teams Laliga?
Levante Champion Cup in Spain Libre 1937
Carmelo, the Bay Beckenbauer
The reason that Dennis Bergkamp was terrified of flying
The best 11 the history of River Plate
Gabriel Omar Amato, the predator's goal
T-shirt SD Eibar, the rojiblanco the Barca
The toughest game in history: 'The battle of Santiago'

One thought on “Why the amateur football team is called 'fan'?”

The World Cup Italy 90, the first video game of a World Cup

The five best gaming clubs in Spain: How Spanish football was affected by gambling advertising rules

Who is the best tipster in Spain?

Blackburn Rovers champion of the Premier of the 95

What sports offer the greatest benefits when betting??

Sports betting houses and their love for Spanish football

Hasselbaink and his crazy season at Atlético de Madrid

Teams that won the World Cup as host